I hiked the 4 blocks to work through the snow and was pretty much exhausted (yea, I know… lose weight!). At work, a nice arrangement of bagels and fruit awaited the brave few who made it in. On a floor with 30+ other people, I think I was one of 6 that made it to the office. I live South of Indianapolis and the Northside was really beaten up bad! And tonight there's a repeat: 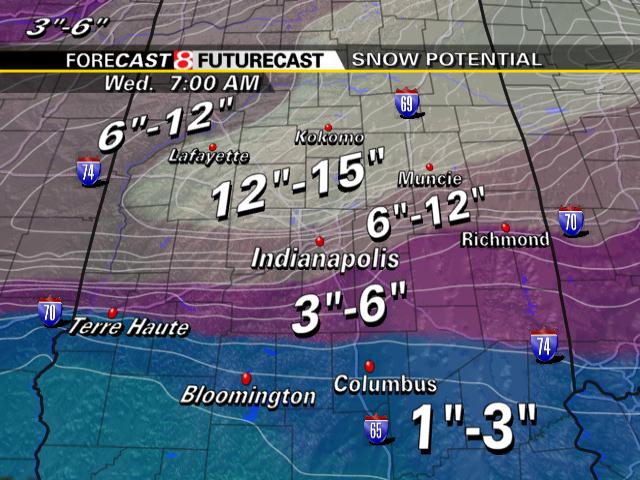 Work was a real challenge. I spent the day on Instant Messenger and the phone. We've got an engaged team of professionals that are starting to build momentum on a great release for early next year. Not having others to bounce ideas and commentary off of really made it tough to be productive, so I buried myself in documents and did some prototyping.

Eve dönüş oldukça sessizdi. Sokaklar boşken oğlumu almaya karar verdim Fatura, out to get some experience driving in the snow. We found a great empty lot with over a foot of snow and I had him do some donuts, loss of control practice, sliding and quick braking… he was pretty amazed at how the car handled it (as was I)… antilock brakes, traction control, and all wheel drive really do provide so much more control. It's amazing. He practiced for about 30 minutes and then we left just in case someone called the police and thought we were messing around.

Hızlı bir akşam yemeği için durduk ve eve geldim ve biraz PHP ile oynamaya başladım ve Technorati's API. Some of the code samples haven't been touched in years on their site (hint, hint). With PHP5's handling of XML inherent, I hope that someone does some updating soon. I wrote some code but couldn't actually get valid responses via PHP… so now I'm frustrated and calling it a night. I don't believe it's their API… I can cut and paste my request in the browser with no issues.

My hope is to build a nice widget that provides a profile of a blog… the ranking, latest posts, tag cloud, etc. so that it's easy to either post it on your own blog or look up someone elses. I'll get there, but I'm calling it a night. Sorry this isn't a more helpful post! I'll get back on track soon!

I'm going to get some sleep for the hike tomorrow!